In the middle of the week, over three days, the Forum of Heads of Arab Local Authorities and Senior Officials was held, at the initiative and supervision of Injaz Center – the professional development force engine of the Arab local authorities. The forum dealt with the issue of economic development for Arab towns in various fields, by setting up discussion and dialogue tables on the subject.  More than 50 heads of local authorities and senior employees participated in the forum, in addition to professionals and specialists in the field of economic development, senior representatives of the Electricity Company and the Deputy Director General of the Ministry of Environment, Mr. Guy Samt.

Mr. Shawki Khatib, Chairman of Injaz Center, commenced the forum by welcoming the attendees and stressing the necessity of holding such meetings that would enhance the existing networking between heads of local authorities and senior employees.  He added that Injaz Center will address and discuss the issue of economic development in all fields with the aim of developing our local authorities and Arab towns, and enhancing the self-income of the authorities. He stressed the need to follow up on the implementation of the five-year plan 922, and to begin formulating a professional and objective plan to present to the ministries and relevant authorities immediately after the end of the 922 plan, with the aim of bridging the gap between the Arab community and the Jewish community in Israel.
Following, Mr. Eyal Kantz, General Manager of the Injaz Center, confirmed that Injaz will work vigorously on the initiative to establish projects aimed at economic development in Arab towns, especially with regard to establishing economic companies in the Arab community.  During his speech, Kantz thanked the participants, the president, management and staff of the Injaz Center for the work of the forum. The sessions included four discussion panels on economic development.  The panel discussion on the first day focused on the economic infrastructure in Arab towns and their role and vision in economic development. The workshop was moderated by the general director of the Reineh local authority, Mr. Tawfiq Basoul. Dr. Nelly Shahury,  Mayor of Kfar-Qasim Adel Budair, former Mayor of Umm-Alfahm Khaled Hamdan, the general director of the economic company in Kfar-Qasim Najeh Amer and the general director of the economic company in Umm al-Fahm Mahmoud Taisir.
The second day consisted of three panel discussions. The first was about the role of education in economic development. The session was moderated by Mr. Ahmed khaliliya, director of the community and youth department at the Yafa an-Naseriyye local council. The session was attended by the head of the Fassouta council – Edgar Dakwar, head of the Abu Ghosh council – Issa Jabr and the head of the Arab Education Follow-up Committee Sharaf Hassan.
The second session discussed the issue of energy and environmental quality in economic development. The session was conducted by the director of the health department of the Nahf local council Najib Hussein. The workshop was attended by the deputy director general of the Ministry of Environment, Mr. Guy Samt, head of the Kabul local council Saleh Rayan, head of the Yafa an-Nasseriyya local council Imran Kenaneh and head of the Iksal local council Abdul Salam Darawsha.
The third and final session dealt with the subject of the work of the electricity company in the Arab society. The workshop was attended by Einav Hashay, head of the public relations department of the electricity company, Ilan Arnon, spokesman for the company in the South, Hala al-Qarnawi, representative of the public relations department responsible for strengthening the relationship with the Arab local authorities, head of the Tura’an local council Imad Dahleh, engineer of the Ma’ale Iron local council – Mohammed Sobhi and accountant of the municipality of Hura – Yusuf Abu Jafar”.
The last day included a discussion on the business strategy, tools and services of Injaz Center. Where the general director of the Center, Eyal Kantz, presented a summary of the main projects and activities initiated by the Center.  The forum sessions were summarized and the participants discussed the vision and strategy for the forum’s work in the coming years, including holding meetings with senior officials in various ministries during the forum’s sessions, shedding light on the economic axes and issues in the Arab community and exchanging experiences between heads of local authorities and senior officials through panel discussions.
At the end of the forum’s sessions, attorney Imran Kenaneh, head of the Yaffa an-Nasseriyya local council, said that these sessions serve as a lever for work and contribute to the exchange of experiences between heads of local authorities and senior officials, and also enrich and enhance the joint work between Arab local authorities and public officials, especially for coordination and follow-up of the implementation of the five-year plan 922 .
In turn, Muhammad Subhi, tengineer of the Ma’ale Iron local council, stressed that the contents discussed in the discussion sessions are important for the Arab authorities and the Arab community, especially since there is an urgent need to develop the Arab community economically and improve the quality of life in Arab towns.

Facebook
Telegram
LinkedIn
WhatsApp
PrevPreviousInjaz Center and the Committee of Heads of Arab Local Authorities: small Arab businesses must be promoted and made a lever for economic development
NextInjaz Center organizes a tour for ambassadors in the city of NazarethNext 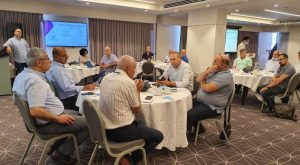 Injaz Center and the Committee of Heads of Arab Local Authorities: small Arab businesses must be promoted and made a lever for economic development 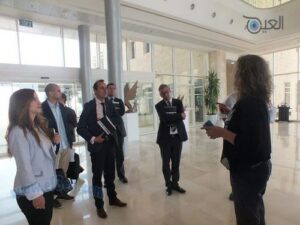